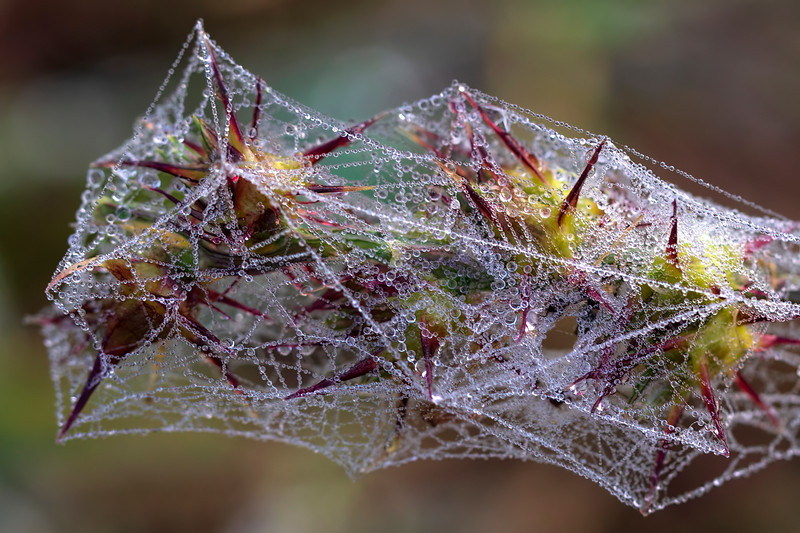 Beauty Among the Thorns

I love to wander the land when it’s foggy or heavy with dew. I went out when I shouldn’t have (weak from being sick the day before). But I must, as I love to shoot dew-laden nature. I’m pushing the limits of my camera & knowledge & falling short. But, even so, this is beautiful to me despite them being infernal sticker burrs.

On a funny note, not long after this, I ended up with tons of sticker burrs all over me. My elbow hurt the worst. My long-suffering husband & I removed well over 50 of them from my jeans & hoodie jacket. It left me tired & cranky until I viewed the pictures I took.

Notes: I did not want to go higher than ISO 200 due to noise. The hazy sun is the reason for a low shutter speed. But, I used a tripod due to shaky hands from being weak.

I am late with this post. I blame the vacation (holiday) and the remodeling of Dan’s office.
Better late than never, correct? 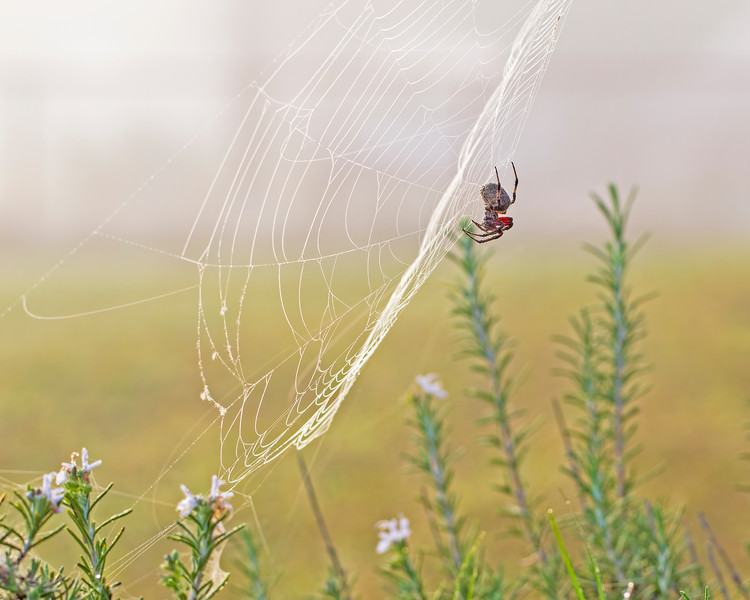 This garden spider looked as if it was bejeweled or gilded with silver. She is heavy laden with dew. She took up temporary residence among the sole surviving lavender bush. I love this image. I am glad I took the time to shoot her. The spider picked up its web & was gone within a day. No regrets.

Thanks to a couple of helpful members of my mini-group, they let me know it fits the theme. It caused me to do more research. As a result, I agree. Thus, this is my submission (& I am glad for it).

“There are two events in everybody’s life that nobody remembers. Two moments experienced by every living thing. Yet no one remembers anything about them. Nobody remembers being born and nobody remembers dying. Is that why we always stare into the eye sockets of a skull? Because we’re asking, “What was it like?” “Does it hurt?” “Are you still scared?”. ~ Doctor Who, Season 9, Heaven Sent

Believe it or not, I fear death & the dead or dying. When Doctor Who said the above quote, it stuck with me. I hope I didn’t creep anyone out with this image. But, I’m sure I did.

This was a tough exercise in which I had only Saturday night to shoot. This will be one that I will revisit in the future as I’m not happy with how this turned out. My first experience using smoke bombs & it was scary too.

As usual, I didn’t have enough space on the 52Frames site to write down what I did to achieve this image.

I built this dummy-like thing (with the help of my husband) using a cement cardboard tube for the body, a stick of wood with old washcloths to form the shoulders, and chicken wiring to form (shape) the hood and neck. The upper arms were sticks of wood attached to the shoulder and I attached the arms/hands (halloween yard art) using screws and zip-ties.  I DIY’ed a tube out of empty toilet paper rolls and black duct tape for some smoke to go down the arm.  I used a cheap cosplay robe and a halloween skull to complete the outfit. The wooden shoulders, chicken wiring, and front of cardboard cement tubing was painted black as to not show up via light. I placed and arranged this thing on two concrete pavers in our backyard with a DIY black backdrop.  Note: we had all of these items except the halloween props and robe.

I set speed lights on both sides of this figure thing. I really wanted to give it some backlighting too; but, I was unable to figure out how to do that with the time constraints. After I was satisfied with the lighting situation (with a few test shots), a smoke bomb was carefully inserted into the cardboard tube (via the top). An assistant during the shoot (my husband in this case) is highly recommended. I had him handle the smoke grenade. He also held a posterboard in front of skull to allow smoke to build up and then he took it away. I was able to get quite a few shots; but, only two usuable images with what I envisioned for this endeavor.  Of course, both images fell short of what I envisioned.  I think it would help immensely if I could somehow figured out how to have backlighting on the figure as to show the shoulders, robe, and hood more. (The light stand was not tall enough to put light over the backdrop.) So, I’ll figure out how to rig up a system to use in the future.

The Negative is Positive

This is the negative of a photo I shot. I was outside with my cat on her leash when I spot these tiny little buds no larger than 1/4″. I did the caveman squat & shot as close as I could with my phone. I liked the original (in comments below); but, felt it was boring. I played around and landed on the negative. I loved how some parts look like frozen snowflakes and the colors were both pleasing to the eye and exciting for me. So, this is my submission.

The upload did not pick up the aperture. I went into the file data and it’s f/2.4

The Original of the Negative

Mine is the sunlight, mine is the morning
Born of the One Light Eden saw play
Praise with elation, praise every morning
God’s re-creation of the new day

This beautiful little chapel was built in honor of an almost six-year-old girl that passed away from cancer in 2011. It’s a building that is supposed to be open most of the day. If it’s not, you can ask for access which I did. This is my third attempt (trip) to get a decent shot. The 1st was a gloomy morning & the camera picked up a haze in the air. The 2nd was in the evening where the sun cast harsh shadows. This 3rd & final attempt was Friday morning & the sun shined on/behind Dan nicely. I cloned out a reflection of my tripod. I chose to go with B&W to minimize the colorful distractions of the other reflections. I used Dan because it’s so much easier than trying to do a self-portrait! Ha!

This is a close up shot of a Bordered Patch Butterfly. I was kind of shocked upon viewing this on my monitor. It’s not as cute as the others I took. But, it’s interesting especially the eyes.